As a former Tottenham player who had his first training sessions in an abandoned warehouse somewhere in Russia, went to school in Harrow but grew up watching Match of the Day and dreamed of becoming a footballer, Armando Shashoua already has a special story.

Combine it with the extraordinary Spanish Cup game of Atletico Baleares, a third division club, and it’s a real fairy tale.

The 21-year-old midfielder, who has the number 6 on his back because one of his football idols was Xavi, was at the heart of Spain’s biggest cup shock this season as his team defeated first division Getafe 5-0.

He was involved again when they defeated another top team Celta Vigo in the next round. And on Sunday afternoon, he will face Valencia for a place in the quarter-finals.

He is eligible to represent five countries: Egypt and the US (because of his father), Spain and Venezuela (because of his mother), and England, where he lived all his life before moving to Mallorca. All his life, that is, except for that short period in Russia.

“My earliest football memory of training well is when we went to live in Russia when we were little because my father worked there,” he says. “My brother and I loved football so much that my father hired a coach for us and we went to an abandoned warehouse to train – I don’t remember this because I was about four years old at the time.

“We used to practice with these little balls that didn’t have a flat surface, so they bounced weirdly off the walls, to test touches and things like that. That’s where we started.

“We came back to England and I played for London Colney Colts when I was six and I was picked up by Tottenham when I was seven.”

His father, Mark Shashoua, CEO of event multinational Hyve, was a Southampton supporter, “because of Matt Le Tissier,” Armando says, and while he wasn’t passionate about the game, he could tell his two sons were – Armando’s older brother Samuel now plays for Tenerife.

“We moved a lot,” he says. “I was born in Chelsea, then we went to Russia, when we were in Hertfordshire. I went to a school called Edge Grove. My brother went to Harrow. Myself and my mother moved to Battersea and I finished the last two years of prep school in Battersea and then went to Harrow too.’

He knows full well that ‘I went to Harrow’ is something a Prime Minister would say (Winston Churchill went there) sooner than a footballer. “There were definitely differences between myself and the people around me because of football,” he says.

‘It really helped me to get to know different cultures, people and upbringing. I definitely felt a little different because I was in boarding school and came from there to train four times a week. I never thought that was a bad thing and I was always grateful to my father for that and my mother (Alejandra, a psychotherapist) for taking me to Tottenham, even if it was a two-hour journey.”

He is not the only footballer who has received private training. Frank Lampard and Alex Oxlaide Chamberlain are two England internationals who both went to paid schools. And he says it was a problem for some coaches, but almost never for young teammates.

As a child, Shashoua was in the books at Tottenham from the age of seven

“At Tottenham we had a good group and we were together from a young age. I remember one time I had a birthday party when I was at the Spurs and a bunch of Tottenham people and some school friends all came over.

“I’ve now come to the point where my Tottenham friends and my school friends are all hanging out together.

“It was something I got more from coaches, ‘Oh, you’re a genteel boy, you could arrange your life for you, how badly do you want it?’

“These are things that are raised and it’s up to you to show that, no, I want to play football because I love the game. And to show that, through everything you do.

“It was also something I got from teachers: ‘Oh, I think you should do something else’.

“It’s essentially how much you want it. I remember watching Match of the Day and watching matches on the weekends as a kid and thinking this is what I would love to do.”

He was seven when Spurs saw him at one of their Friday night dome events at the Spurs Lodge. He had grown up adoring Xavi and Iniesta, and at Tottenham he would be taken under the wing of another small but technically blessed midfielder.

I had Scott Parker and Matt Wells for the U17 and U18 teams and we were great those two seasons,” he recalls.

Those two are the biggest influences. As a pair they are incredible. Scott sees things that only a footballer who has played at the highest level would know.

‘Matt Wells studies the game to an absurd degree; you can say he is obsessed. You would recommend our playing style to Pep . made you think [Guardiola]. They are now doing very well in Bournemouth, which I am very happy with.”

Perhaps Parker saw something of himself in midfielder Shashoua? “Hopefully he even sees one percent,” he says. “He’s a legend.”

But frustrated with U-21 competition and what seemed like no real road to the first team, he moved to Atletico Baleares in January 2020.

“It didn’t go so well at first!” he smiles. “The manager said in an interview that he wasn’t really sure who I was. Then Covid hit and the whole season was kind of written off.”

Sporting director Patrick Messow, however, wanted him to stay, and when former Birmingham U-23 coach Xavi Calm came in as the new manager, Shashoua became a fixture in the first team.

Fast forward to last December when he played the biggest game of his life yet in that cup shock.

‘It was an incredible evening: evening kick-off, full stadium, a first division. To win 5-0, I couldn’t believe it. At one point we held the ball to the end and the fans did the “Ole!” with every step.’

They defeated Celta Vigo 2-1 in the next round and that resulted in a huge draw in the last 16.

“There’s a part of you that wants Madrid or Barcelona,” he says. “But you play against a first division in the cup.”

Getting Valencia also means a shock is just that little bit more likely. “I spoke to someone on the pitch after the game against Celta and said, ‘You know what? Let’s win it. Let’s win the cup. Why not? There is that dream that takes you forward. The chance is minimal, but that’s football.’

Shashoua has just signed a new contract until 2024 and he says the best scenario for the future is to play for Atletico Baleares in the second tier.

Speaking of a return to England, he added: “For the next year or two, it will be more in my head to play in Spain. But I would like to play in the Premier League if that were an opportunity. I don’t see a way in that yet: I have to do more in terms of goals, assists, play at a higher level in the second division or la Liga, so Spain now feels like a good place for me.’

His father must be happy that he has sought out the personal coach for his young sons in Russia. “I think my mom is happier because she spent so many hours taking us to practice. All the love in the world goes to her for doing so much for me. She would take Sam and I everywhere. Also to the thing in Russia.’

Did his parents ever doubt that this was the career for him? “I think my dad thought it was a hobby until it got really serious,” he says. “I got a Nike contract and my brother signed a scholarship with Spurs. Until then I don’t know if he saw it as a career path. But my mother said: whatever you choose, I’m with you.’

Due to work commitments and Covid complications, they will not be able to attend the game on Sunday, but both will be there in mind. And if Atlético Baleares make it a hat-trick on top heads, they’ll be in the quarter-finals.

British father, 48, 'stabbed to death by his Indonesian girlfriend in Bali during video call home'

Barcelona: Ousmane Dembélé backed by footballers’ union after being blocked by LaLiga club 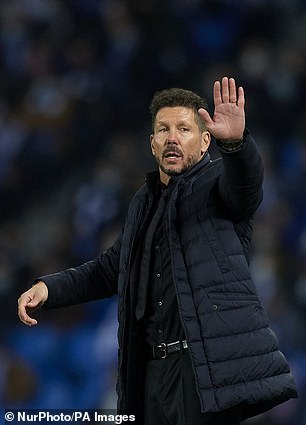