This is the former commando Royal Engineer and father of two who has been arrested on suspicion of murdering a couple who were killed while their children slept upstairs amid a bitter row over a parking space.

Colin Reeves, 34, lived in a three-bedroom property on a new-build estate in the Somerset village of Norton Fitzwarren, near Taunton, next door to IT teacher Stephen Chapple, 36, and his garden centre worker wife Jenny, 33.

It comes as black and white doorbell footage reveals the moment the warring neighbours clashed by the victims’ front door. Video shows the Jenny being confronted by a man who calls her a ‘cheeky little b***h’.

IT teacher Stephen Chapple, 36, and his garden centre worker wife Jenny, 33, were found at the £250,000 property on a new-build estate in the sleepy Somerset village of Norton Fitzwarren, near Taunton, on Sunday night. The pair – named locally – were found with serious injuries and died at the scene.

Reeves lived with his wife, Kayley Louise and their two children and they are believed to have moved into the property around three years ago.

This is the former soldier and father of two Colin Reeves, 34, who has been arrested for murdering a couple were killed while their children slept upstairs amid a bitter row over a parking space

Colin Reeves, 34, (right and left) lived in a three-bedroom property on a new-build estate in the Somerset village of Norton Fitzwarren, near Taunton, next door to IT teacher Stephen Chapple, 36, and his garden centre worker wife Jenny, 33

It comes as black and white doorbell footage reveals the moment the warring neighbours clashed by the victims’ front door. Video shows the Jenny being confronted by a man who calls her a ‘cheeky little b***h’

IT teacher Stephen Chapple, 36, and his garden centre worker wife Jenny, 33, were found at their property in the Somerset village of Norton Fitzwarren, near Taunton, on Sunday night

Footage today emerged of Jenny Chapple appeared to clash with her neighbour over the long-running parking dispute. Video obtained by the Sun shows the garden centre coffee shop worker reaching for her door handle as she is confronted by a man who accuses her of ‘f**ing gobbing off’.

She then tells the man to ‘f*** off’ before going into the house. The man then walks into the frame and calls her a ‘f***ing c***’ as he walks away.

Neighbours of the couple told MailOnline that the Chapples and the former squaddie, 34, had been involved in a long running dispute over parking, which saw them leaving their cars outside each other’s drives, causing them to be blocked in.

One neighbour, Sarah, who did not want to give her surname, said that tension between them accelerated three months ago after Jenny crashed her car into a vehicle belonging to the neighbour as she returned home.

She said: ‘Things got even worse between them after that point. Both sides dug their heels in and were equally to blame for the dispute.’

Residents on the private estate, which was built seven years ago, said disputes over parking are common because of narrow roads and the lack of parking space.

Marion McGregor said: ‘Generally, everybody has issues with parking around here. These are new built houses which only come with one parking space each. But many people have more than one car because the public transport in this area is not good.

‘There are always issues between neighbours about cars blocking their drives or parked outside their homes. It’s a real nuisance issue on this estate. Overall, it’s a lovely area but people can get quite intense and angry about parking.’

Police confirmed at a press conference this afternoon that the couple’s two children, five and six, were in their upstairs bedrooms while the attack took place. They were found ‘distressed’ but unhurt and are now being looked after by Jenny’s sister at a home nearby, neighbours said.

Jenny suffered ‘multiple’ stab wounds, her postmortem found. Stephen’s has not yet been carried out.

The former soldier was arrested on suspicion of murder and is still in custody. His father, 67, has since been released under investigation.

Residents have confirmed parking was a contentious issue on the estate and drone pictures today showed two cars parked bumper to bumper in the Chapples’ designated space. Officers were seen searching a nearby drain.

A ground view of the parking space. One woman said: ‘Everyone has an issue with parking around here. Some people have multiple cars there isn’t space for and it has caused a lot of upset’

One resident, Melissa, said: ‘I never knew of a dispute over parking that Jenny and Steven were involved with specifically.

‘But everyone has an issue with parking around here. Some people have multiple cars there isn’t space for and it has caused a lot of upset.’

Inspector Justin French confirmed that police had been called to the Chapples’ address previously. He said: ‘There have been previous incidents. There have been call outs in the past.’

Avon and Somerset Police said the incident on the Dragon Rise estate would be referred to the policing watchdog due to ‘prior police contact with those involved’.

The pair – who were named locally – were found with serious injuries and died at the scene. Jenny is pictured in a social media photo

A forensic officer pictured today at the scene in Norton Fitzwarren, a sleepy village near Taunton

Two police officers are seen searching a drain on Dragon Rise. In the foreground are floral tributes to the couple

A message placed on tributes outside Dragon Rise. Police are continuing to investigate the lead-up to the Chapples’ deaths

‘You lit up the street with your smile’: Friends pay tribute to couple

Friends have paid tribute to the Chapples in notes left at the scene.

One heartfelt message on one read: ‘Jennifer you lit up the street with your smile. You and Steve have been such wonderful friends since you arrived in our lives. Such a kind and welcoming couple.

‘You have left a void that will be felt across all those who knew you. Words cannot express how much we’ll miss you both.’

Another message said: ‘Jenni, chick I bloody miss you.

‘Thank you for the laughter, joy and craziness you brought into my life. And thank you for sharing your family.’

One unnamed resident who lived nearby to the couple, and whose children went to the same school and Jenny and Steven’s, said: ‘Jennifer was always very chatty and she loved dogs – she’d run up to every dog she saw.

‘Steve was also a lovely man – he seemed to be very devoted to his children.’

Another nearby resident called Barbara, aged 40, said: ‘I wasn’t close to the family but whenever I saw Jennifer she was ever so friendly and was always smiling.

‘She was always really happy and would stop for a laugh and a joke. Her hair was always bright – just like her personality. They will both be dearly missed.’

“Steve will be sadly missed by all staff and students and our thoughts and prayers go out to his children and wider family at this time.”

Rob Brooks, manager of the Otter Garden Centre, where Jenny worked in the coffee shop, told MailOnline: ‘She was a well loved member of staff and a very kind person.

‘We all loved her and so did the customers. We are devastated. We will remember her as a beautiful, kind and dedicated mother and colleague. This has hit us all very hard and it feels very raw.’

Mr Brooks said that Jenny had been working at the garden centre since the start of the year.

He added: ‘Stephen and the kids would sometimes come in and we got to know them too. They were a really close knit, loving family.

‘There’s a lot of speculation going around that this was a neighbourly dispute but I don’t want to get into any of that right now.’

‘I knew them by sight but I didn’t know their names, my dog used to really like the lady.’

Another neighbour said he had not realised anything was wrong even when the air ambulance arrived, and had believed it had just been from the nearby military base.

‘We slept through it all – we only saw all of the police and the tape this morning,’ he said.

Others said they heard screams and later the police and emergency services arriving.

A police cordon is still in place at two properties on the street while officers carry out a forensic examination of the scene.

Due to prior police contact with those involved, a voluntary referral will be made to the Independent Office for Police Conduct.

A formal identification process and post-mortem examinations to determine the causes of death will take place in due course.

Officers were called to Dragon Rise (pictured today) in Taunton, Somerset, at 9.45pm on Sunday. The couple were found with serious injuries

A police officer guards Dragon Rise in Taunton today. Flowers have been left nearby by wellwishers

Detective Inspector Neil Meade, of the Major Crime Investigation Team, said: ‘The thoughts of everyone in the force this morning are with the families of the two people who sadly died last night.

‘Two young children were inside the property at the time of the incident and while thankfully they weren’t hurt, they are understandably distressed at what has happened.

‘They are being looked after and specially trained officers have been deployed to support the victim’s families in what is undoubtedly the most difficult of times.’

He added: ‘We will carry out a full and thorough investigation and we will do all we can to achieve justice for the victim’s families.

‘While this appears to be an isolated incident, there will be increased police activity in the area to provide the community with reassurance.

‘Incidents like this are very rare but when they do happen, we know they cause significant concern so we’d urge anyone with worries or questions to speak to dan officer or contact their local neighbourhood policing team.

‘If anyone has information which would help our investigation, please phone 101 and give the call-handler the reference number 5221274497.’

Due to prior police contact with those involved, a voluntary referral will be made to the Independent Office for Police Conduct

A woman living nearby said: ‘We didn’t see much of (the suspect) really, but there had been rows in the past about parking’  (image taken yesterday)

Police hunt down runaway prison, 23, who fled mental health department after being transferred from Wormwood

Brian Laundrie died of a single gunshot wound to the head, autopsy reveals 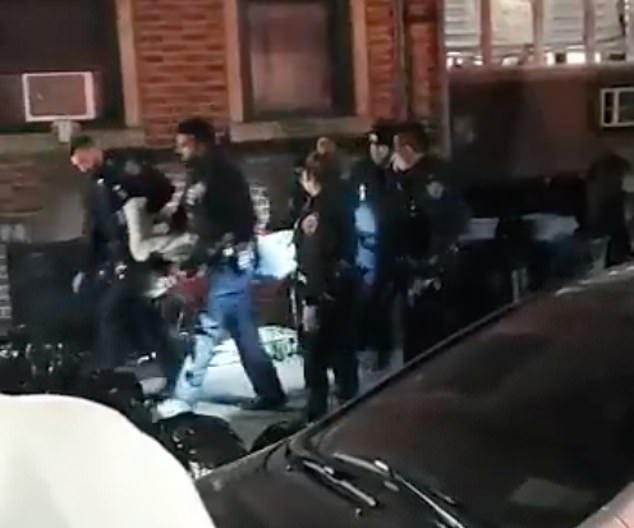